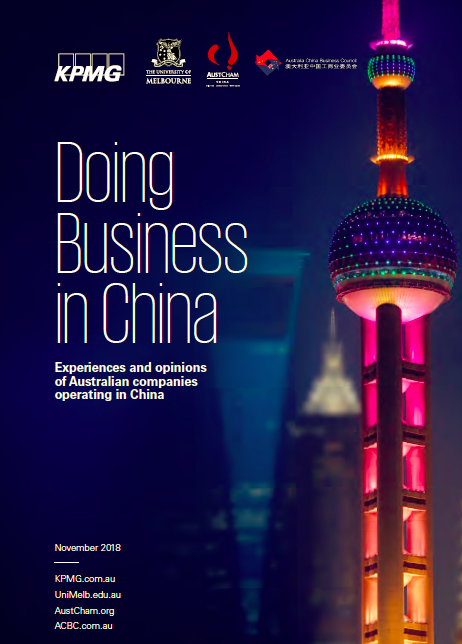 About the Report
The 2018 Doing Business in China report follows the survey of members of the China-Australia Chamber of Commerce (AustCham) and the Australian China Business Council (ACBC) and was conducted in Q3 2018. The respondents comprised Australian businesses operating in or doing business with China and responses were received from 165 companies across a range of sectors.

The report is a joint research initiative of AustCham China, Australia China Business Council, KPMG and the University of Melbourne. It was launched at the China International Import Expo (CIIE) in Shanghai on November 6th with the support of the Senator the Hon Simon Birmingham, Minister for Trade, Tourism and Investment and H.E. Jan Adams AO PSM, Ambassador to the PRC.

Report Purpose:
The Doing Business in China Report is a critical tool for the chamber as it helps Australian businesses understand the opportunities and challenges facing companies in China. This report highlights the present and expected future benefits of the still young China-Australia Free Trade Agreement with Australian businesses indicating real optimism about its impact. While the generally agreed upon difficulty-of-doing-business remains the Achilles’ heel for many an Australian trade venture in China, this survey can help reflect and uncover some of the frustrations and obstacles facing Australian businesses in China.

Key findings of the research include:

See all Doing Business in China reports below: